Collimated outflows, the so-called jets,  are ubiquitous among astrophysical sources including —  but not limited to — gamma-ray bursts (GRBs), active galactic nuclei (AGN), and micro-quasars.  Even though jets are born in widely different environments, it is commonly accepted that relativistic jets are powered by the accretion of matter onto a compact object. 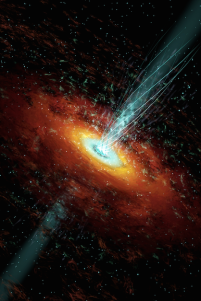 The brightest multi-wavelength (MW) emitters of the extragalactic sky are blazars, namely AGN whose jets point towards the observer. The non-thermal radiation, which is produced  by relativistic particles within the jet, is variable on different timescales ranging from a few minutes (!) to several days.  Although blazars have been the target of multiple observing MW campaigns over the years, our understanding of blazar physics is not yet complete.

How is the jet power converted into radiation? How are particles being accelerated? What is the nature of the high- energy particles that are responsible for the observed radiation? Are they electrons, protons or a mixture of the two?

I try to address these open questions by  (i) understanding in depth the radiative processes at play, (ii) identifying robust imprints of hadronic acceleration on the photon emission (e.g. [1,2]), (iii) making predictions about neutrino production based upon their radiation (e.g. [3,4]), and (iv) theoretically investigating the dissipation  processes in astrophysical jets (e.g. [5,6]).

Jets are likely to be launched as Poynting-flux dominated flows [1,2] and remain such after their acceleration and collimation (e.g. [3,4]). In regions where the magnetic field changes polarity, energy can be dissipated and eventually transferred to radiating particles via the magnetic reconnection process.

The issue of what powers the emission from blazar jets is still unresolved,
with shocks and magnetic reconnection being two candidate dissipation mechanisms. My collaborators and I have recently revisited this issue on firm physical grounds using the recent progress in Particle-In-Cell (PIC) simulations [5].  Relativistic  magnetic reconnection was found to satisfy all three observational constraints in blazar jets: (i) high efficiency: magnetic reconnection can deposit more than 50% of the dissipated energy into non-thermal leptons as long as the energy density of  the magnetic field in the bulk flow is larger than the rest mass energy density, (ii) rough energy equipartition between particles and magnetic fields, and (iii) non-thermal particle distribution. The reconnection process in blazar jets is a very good candidate for the production of powerful, fast-evolving flares [6, 7].

Figure 2: Non-thermal radiation from a reconnection event in a blazar jet with magnetization σ=10. Left and right panels show, respectively, the γ-ray light curve and multi-wavelength spectrum produced by numerous plasmoids in the reconnection layer, shown in Figure 1. Perfect alignment of the jet axis, the reconnection layer, and the observer is assumed (Credit: I. Christie). Results are published in [7].

Neutrinos are weakly interacting particles that travel in space almost unaffected by the intervening matter. The IceCube Neutrino Telescope located at the South Pole announced on 2013 the first-ever detection of PeV (1015 eV) neutrinos of astrophysical origin.  Part of my research focuses on the processes of neutrino production in a variety of astrophysical sources that range from relativistic jets from blazars [1,2,3] to gamma-ray bursts [4], and supernovae [5]. My ultimate goal is to identify the sources of high-energy neutrinos and thereby the particle accelerators of the Universe.

Magnetic reconnection is invoked as an efficient particle accelerator in a variety of astrophysical sources of non-thermal high-energy radiation. With large-scale two-dimensional PIC simulations of relativistic reconnection in pair plasmas, we (i.e. L. Sironi and myself) studied the long-term evolution of the power-law slope and high-energy cut-off of the spectrum of accelerated particles [1].

We found that the high-energy spectral cut-off does not saturate at γcut ~ 4σ, as claimed by earlier studies, but it steadily grows with time as long as the reconnection process stays active. At late times, the cut-off scales approximately as γcut ∝ √t, regardless of the flow magnetization and initial temperature. We showed that the particles dominating the high-energy spectral cut-off reside in plasmoids, and in particular in a strongly magnetized ring around the plasmoid core. The growth of their energy is driven by the increase in the local field strength, coupled with the conservation of the first adiabatic invariant.

Animated Figure: temporal evolution of the reconnection layer’s  structure from a 2D PIC simulation of reconnection in a pair plasma with magnetization σ=10 [1].  Top and middle panels show respectively the number density and magnetic energy density of the plasma. The Lorentz factor of a single particle as a function of time is shown in the bottom panel. Its location in the reconnection layer is indicated with a yellow circle in the two upper panels. The particle is first accelerated at an X-point, indicated by sharp jump in energy at early times.  Then, it is captured by a plasmoid, which remains isolated between 0.7 L/c and 1.7 L/c. Yet, the particle slowly increases its energy due to the increase in the local field strength and the conservation of the first adiabatic invariant.

The intergalactic medium is not an empty space. Among others, it  contains dust grains that may scatter X-ray photons.   Dust grains with different sizes scatter photons of different energies at different angles. The dust composition also affects the scattering cross sections. Thus, X-ray echoes (i.e., scattered light) contain information about the properties of the dust grains.  Together with my collaborator G. Vasilopoulos, we have modeled the temporal and spectral evolution of the X-ray dust rings formed by a major outburst of the low-mass black-hole binary V404 Cyg and extracted  information about the dust clouds lying between the source and Earth [1] — see also Chandra‘s Newsletter.

Image credit: A. Beardmore (Univ. of Leicester) and NASA/Swift

Stellar orbits around the super-massive black hole (SMBH) lying in our Galactic Center. The S0-2 star (yellow orbit) is the brightest member of the S-cluster. It is a massive star with high mass-loss rate [1] and has a tight orbit (yellow line) with a pericenter distance of  ~3000 gravitational radii  [2].

The low-luminosity emission of Sgr A* is believed to originate from a radiatively inefficient accretion flow whose properties (e.g. gas density) remain elusive at distances well within the sphere of influence of the SMBH. Interactions of the disc with the winds of stars orbiting the SMBH pose a unique way of indirectly studying the accretion flow. The S2 star can serve as an excellent probe of the disc properties at distances ∼  cm away from the SMBH due to its tight orbit and powerfull stellar wind.  My collaborators (I. Christie, P. Mimica & D. Giannios)  and I have recently performed hydro-dynamic calculations of the wind-disc interaction and showed that a month-long X-ray flare is expected during the up-coming pericenter passage of S2 [4].

PSR J2032+4127 is a young (~0.2 Myr), rapidly rotating , and strongly magnetized  neutron star (pulsar) on a highly eccentric orbit around the high-mass Be star MT91 213.  Be stars are characterized by strong stellar winds and extended variable encircling disks of material (decretion disks). As the pulsar approaches the Be star, it starts interacting with the stellar wind and the decretion disk. The interaction is strongest at periastron, when the distance between the two stars is the shortest and their relative velocity the highest. Study of these interactions can shed light to the pulsar wind properties (e.g., Lorentz factor and magnetization) and the structure of the stellar wind/disk.  Image credit: NASA Goddard Conceptual Image Lab

Due to its highly eccentric orbit, the orbital period of this binary system is ~ 50 yr [1]. Thus, the 2018 periastron passage of PSR J2032+4127 offered an one-to-a-lifetime opportunity to measure the system’s properties!

Yet, interesting data started to arrive even before the periastron: Swift/XRT observations of the system showed an increase of the non-thermal X-ray flux several months before the periastron passage, suggesting that the two stellar winds have started interacting (black symbols in the left-hand side panel). With G. Vasilopoulos and collaborators [2], we demonstrated how one can use X-ray light curves before and after periastron to constrain the azimuthal profile of the Be stellar wind and the properties of the pulsar wind (see figure above).